A new regulation on FDI screening in Europe

On 5 March 2019, the Council of the EU approved a new framework to screen foreign direct investments ("FDI") coming into the EU. This concludes a legislative process kicked off in 2017. The newly adopted Regulation aims to protect the EU's strategic critical assets against investments that are detrimental to the legitimate interests of the Union or its Member States. It sits well with the more ambitious move by France and Germany to shape a European industrial strategy,1 which acknowledges FDI screening as one of its centrepieces.

Rather, the Regulation seeks to set in place a framework that will enable structured cooperation between the European Commission (EC) and the Member States, while allowing decentralised FDI investment screening by the Member States.

To that end the new framework will:2

The attainment of these objectives is centered on the cooperation mechanism. Going forward, Member States and the EC will be able to cooperate on incoming foreign direct investments in the framework of a structured process. 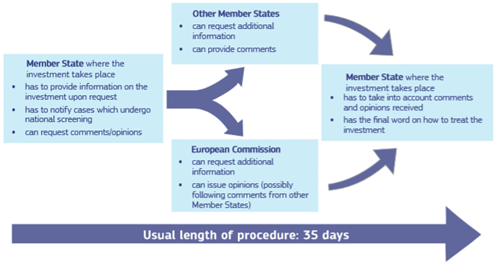 This cooperation process also applies to FDIs in Member States without a screening mechanism. Thus, the Regulation empowers Member States and the EC to comment on FDI that are not subject to an official screening.

The Regulation covers a broad range of investments which aim to establish or maintain lasting links between a non-EU investor (including state entities) and an undertaking carrying out economic activity in a Member State.

It sets out an indicative list of factors which the Member States / EC should consider when determining whether an investment is likely to affect security or public order. This includes effects of the investment on critical infrastructure, critical technologies, supply of critical inputs (e.g. energy or raw materials), access to sensitive information or the ability to control information, and the freedom and pluralism of the media.

The Regulation will enter into force in the coming weeks following publication in the Official Journal. Member States and the EC will then have a transitional period of 18 months to put in place the necessary arrangements for the application of this new mechanism.